When You’re Injured by a Drowsy Driver in Frederick, Maryland

Similar to drunk driving and distracted driving, drowsy driving causes many vehicle accidents in the U.S. each year. According to the National Highway Traffic Safety Administration (NHTSA), drowsy driving is a factor in more than 70,000 wrecks, causing nearly 50,000 injuries and close to 1,000 traffic deaths annually. It’s reported that more than one-fifth of fatal car accidents are caused by drowsy drivers.

Despite these statistics that show just one day’s sleep deprivation is equivalent to a blood alcohol content of 0.08%, drowsy driving has not been addressed as vigorously as drunk driving and distracted driving by law enforcement or legislators. As a result, there are drowsy drivers on the roads across the country every day. 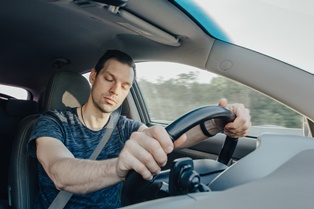 While anyone on the road might occasionally be fatigued due to a sleepless night or overwork, certain motorists are more likely than others to drive when drowsy:

Nearly half a million Americans suffer from sleep disorders that deprive them of sufficient rest at night and leave them tired by day. A significant number of those people take sleep aids that can leave them drowsy when they’re out driving in the daytime.

In addition to nighttime sleep aids, other medications can make a driver drowsy:

Truckers and other drivers may spend entire days or nights behind the wheel. Despite Federal regulations limiting the number of consecutive hours they may drive without rest, many are under pressure to meet delivery deadlines and might receive financial incentives to stay on the road, regardless of how tired they might be.

People who work overnight or on swing shifts often have irregular sleep patterns that clash with their “body clocks” and leave them sleep-deprived. Any one of them could be driving home in a drowsy state in the morning, just as you’re beginning the workday.

Most Americans start driving in their late teens—a time when their bodies still require nine or more hours of sleep per night. Their busy lifestyles and 24-hour social media connectivity, however, often prevent young adults from getting sufficient rest overnight. As a result, drivers younger than 26 are four times as likely as those over 30 to be involved in drowsy driving crashes.

What Happens When You Drive Drowsy

Although it’s difficult to determine if someone causes an accident due to drowsy driving, there are definite behaviors that a drowsy driver will often exhibit, including:

If you’re injured in an accident caused by a drowsy driver, you may file a claim against that driver’s insurance company for damages such as medical expenses, property damage, lost income, and pain and suffering. If the insurer disputes your claim or fails to offer a reasonable settlement, you may file a personal injury lawsuit in civil court to seek fair compensation. To prevail, however, you must prove the drowsy driver was 100% liable for your wreck.

How Your Attorney Can Help

Since there are no field tests for drowsy driving, proving a drowsy driver liable often requires the services of a car accident lawyer who can investigate your crash thoroughly to establish the drowsy driver’s fault for your accident. Your attorney can:

Have You Been Injured by a Drowsy Driver in Frederick, MD?

An experienced car accident attorney can help you prove liability and seek fair compensation for your damages. Please contact us online, or call us at 301-790-3600 to schedule a free consultation. You pay no attorney fees unless we win your case.