In Maryland, bicycles are considered vehicles, and cyclists have the same rights and responsibilities that motorists have on the road. Bicyclists are required to make a complete stop at all red traffic lights and stop signs and must signal when they’re turning or making a stop. Yet still, bicycle accidents in Maryland happen far too often.

Drivers in cars, trucks, and SUVs must exercise due care to avoid collisions with bikes. They’re required to pass a bicycle with at least three feet of clearance for safety and to yield the right-of-way to cyclists at intersections and crosswalks. Motorists are prohibited from throwing anything at a bicycle or opening a door to hit a passing cyclist. Violation of these laws can result in fines and points on the driver’s license.

Regardless of these laws, bicycle crashes, injuries, and deaths have been on the rise in Maryland in recent years. Approximately 700 riders are injured and a dozen killed annually in more than 800 car-bike accidents on Maryland’s roads.

Most bicycle accidents in Maryland take place in urban areas with heavy traffic. Early evenings and weekends during the warmer months are the most dangerous times to ride. Specific causes of car-bike wrecks include:

These types of accidents often result in very serious injuries for cyclists who lack the physical protection of a car and the differences in size and speed between a car and a bike. Injuries commonly suffered in a bike wreck include lacerations, whiplash, road rash, internal organ damage, broken bones, dislocated joints, strained muscles, nerve damage, spinal cord damage, and traumatic brain injury (TBI).

Bicyclists in Maryland must know and observe the rules of the road. Because Maryland is one of four contributory negligence states, a bicyclist who is injured in a car-bike accident but is found to be 1% or more responsible by acting negligently and contributing to the crash will be barred from recovering compensation. Thus, it’s very important that bicyclists understand and follow the laws that regulate motor vehicles. Even if the vehicle driver is largely at fault for the accident, even a small mistake made by a cyclist can prevent them from receiving compensation. 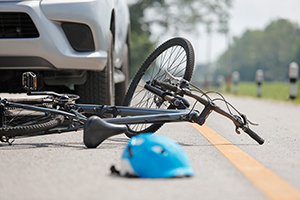 Although wearing a helmet reduces your chance of brain injury in a bike wreck by nearly 50%, helmets are not mandatory for cyclists over 16 in Maryland, and the defendant cannot cite your failure to wear one as contributory negligence, which could bar you from receiving any compensation for your damages. It’s very likely, however, that the at-fault driver’s insurer will try to deny or devalue your claim by accusing you of negligent or illegal behavior that played a role in the crash. An experienced bike accident attorney can stand up to the insurer and work to prove the motorist’s liability, so you can demand fair compensation for your damages. If a fair settlement is not offered, your lawyer can file a lawsuit and fight for you in court.

When Injured in Bicycle Accidents in Maryland, You Need Experienced Representation

In most bicycle accidents in Maryland, the driver of the car is at fault. If you’re injured by a negligent motorist, you may file a claim against that driver’s insurance company for medical bills, property damage, lost income, and pain and suffering. The insurer, however, is not likely to pay your claim without a fight, especially if your injuries are serious and your medical bills high, as they often are in car-bike accidents.

You’ll have to prove the motorist is completely liable in order to recover fair compensation, so consulting an experienced bicycle accident attorney is your first step to justice. Please contact us online, start a chat, or call us at 301-790-3600 to schedule a free consultation. You pay no attorney fees unless we win your case.