Recovering Compensation for Damages After a Maryland Drunk Driving Accident 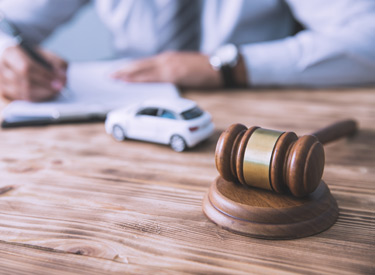 Despite strict laws and a general decrease in DUI crashes in recent decades, drunk driving accidents are still too common across the country and specifically in Maryland, where alcohol is a factor in 10% of all auto accidents and approximately one-third of all traffic fatalities. The consumption of alcohol slows reaction time, diminishes peripheral vision, and makes a driver’s eyes more susceptible to the glare of headlights on the road at night. Drinking also impairs judgment, increasing the likelihood of speeding and reckless driving, which are two major causes of traffic accidents.

When alcohol is to blame for the crash you've been involved in, our experienced and proven Frederick car accident attorney can help you recover the compensation you and your family deserve.

In Maryland, a driver with a blood alcohol content (BAC) level over 0.08 percent can be charged with driving under the influence (DUI). A driver with a BAC level between 0.04 and 0.08 percent can be charged with driving while impaired (DWI). If you’re involved in a crash that police believe was caused by a drunk driver, that driver will probably be given a field sobriety test at the scene. A driver who is found to be legally intoxicated can be arrested and cited for a DUI or DWI, which are crimes. The result of the impaired driver’s sobriety test is strong evidence for a criminal conviction leading to fines and/or jail time.

That conviction, however, will not provide you with compensation for damages you suffer in the accident such as medical expenses, property damage, lost income, and pain and suffering. To collect for damages, you have to file a personal injury claim against the at-fault driver’s insurance company or file a lawsuit against the driver in civil court if you can’t get a fair settlement from the insurer.

And with any Maryland drunk driving accident, it's hard to prove in court. Which is exactly why you need an experienced Frederick car accident attorney by your side.

Common Injuries Caused in a Drunk Driving Accident in Maryland

According to our Frederick car accident attorney, victims of DUI crashes often sustain a variety of serious injuries, including:

Even if you don’t feel you’re seriously hurt after your accident, you should see a doctor right away. Your symptoms might take days to present, but a medical exam and diagnostic tests can reveal injuries you don’t know you have, allowing you to begin treatment soon and increasing the likelihood of the quickest possible recovery. A doctor’s visit right after the accident also proves the injuries were caused by your crash. This proof is important evidence necessary for your insurance claim or lawsuit after a Maryland drunk driving accident.

Although Maryland does not have a dram shop statute holding bars and restaurants strictly liable for serving intoxicated patrons who later cause accidents, it does hold social hosts liable for providing alcohol to underage people who cause crashes after drinking. This means, there could be more than one defendant who shares responsibility for your damages if the at-fault impaired driver is under 21 at the time of your crash. According to our Frederick car accident attorney, holding all liable parties responsible increases your chance of receiving fair compensation if:

Filing claims against or suing multiple defendants in a Maryland drunk driving accident is a complex business best handled by an experienced car accident attorney who will investigate your accident thoroughly to see if a social host was partially at fault for your accident.

It’s also possible that you could be found partially at fault for your own accident. If, for example, you were driving over the speed limit or failed to signal a turn just before you were struck by a drunk driver, that driver’s insurer will do its best to show that you were partially responsible for the crash. Because Maryland follows a contributory negligence standard in personal injury cases, you can be denied compensation if you’re found even one percent at fault for your own accident. This is just one more reason you should consult an experienced lawyer to help you prove the drunk driver was entirely responsible the accident.

Have You Been Injured in a Drunk Driving Accident in Maryland? Our Proven Frederick Car Accident Attorney Can Help!

If you were injured in an accident, our experienced car accident lawyer can help you prove the at-fault driver was 100% responsible and seek fair compensation for your damages. Contact us online, start a chat, or call us to schedule a free consultation with our Frederick car accident attorney today. We take cases on a contingency-fee basis, so you pay no attorney fees unless we win your case.